Molasses dripping from the walls combined with the scent of brown sugar wafted through the air exemplified the dreamy scene that is Kara Walker’s exhibit. Honestly, our main objective heading to Williamsburg was to finally get inside the Domino Sugar Factory Storage Facility which is slated to be demolished. Waiting on a quickly moving line was well worth the quest finally realized when we ultimately saw some incredible art within the walls of an iconic example of old industrial NYC architecture.

The Domino Sugar Factory is comprised of two buildings on Kent Avenue in Williamsburg, the refinery and the storage facility. Originally built in 1856 by the Havemeyer family of Manhattan, operations were moved across the East River, expanding the business along the Williamsburg waterfront where it operated until 2004. A highly prized commodity, the refinery processed more than half the sugar in the United States by 1870 and a major employer for the Brooklyn economy. While the factory closed in 2004, it also gained landmark status in 2007 and by 2010, the City Planning Commission approved the New Domino plan, affordable housing and public access to the waterfront.

As one walked into the awe inspiring space, sugar babies created of sugar greeted you along the path to the goddess sphinx. The sugar babies, in colors that represented many hues of black, brown and red carry baskets filled with large sugar crystals, The smiling, cherubic expressions on their faces create a curiosity in one’s mind when they seem to be metaphorically bleeding blood, sweat and tears by carrying the burden of society’s communal sweet tooth. Walker seemed to be reminding us that America’s  slave history has created something that we take for granted – the sugar that is a staple in our home kitchens. As one moved closer to the goddess sphinx, one is struck by its white glowing luminescence.  She is beautiful! She embodied the nurse, the caretaker, the cook, the cleaner of a white society that has used and abused her.  Her bare breasted figure and her regal gaze upwards heralded her as the ultimate goddess. Subsequently, her left hand is cupped in a gesture that in many cultures signifies “F*#k you”. Subjugation is further explored as one moves towards the back of the sphinx. With her vulva exposed and vulnerable, we are confronted with what Kara Walker intended – a questioning of our history and treatment of a people to satiate our quest for sweetness. Conversations all over the internet deemed this show as controversial and in bad taste. But, good art brings forth questions, discussion, outrage,  and perhaps understanding. Thirty seven tons of sugar were donated by Domino Sugar for this project in order for Walker to shed some light and also, pour some sweet, sweet sugar on an otherwise bitter, bitter subject. 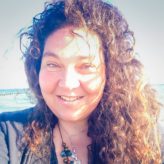 Olya Turchin is a Photographer based out of NY.