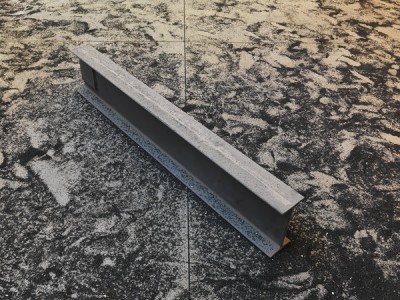 Last Friday I braved the on-again and off-again rain to make the way downtown to Wooster Street.  If you don’t remember, it was the sort of weather that surprised you at every block’s turn, though nearly every other pedestrian seems to look more windswept than you felt.  Fittingly, the show at team gallery remarks on urban structure and violence and is named in a tongue in cheek way after a New York Post article about the Dominique-Strauss Kahn sexual assault case.  Chez Perv is not taken from the incidence of political violence itself but the media filter that makes the thing into its own machine – a scandal.

Before entering the gallery I noticed that wheat paste was applied with big, casual strokes gluing the giant inkjet prints by Gardar Eide Einarsson and Matias Faldbakken to the street facing window.  This move reverses the logic of the storefronts next to the gallery by placing the construction on the outside and the image on the inside, at a moment when the wheat paste is coming out of the image’s frame and taking its own solitary form on the glass.  The images on the other side could almost be read as abstract but tiny street signs signify an urban landscape.  Slightly humorous, the prints are slightly smaller than the windows and the real size landscape outside framing the prints are read as larger but seen as about the same size as the buildings in the pictures, which seem to be shot from across the street. 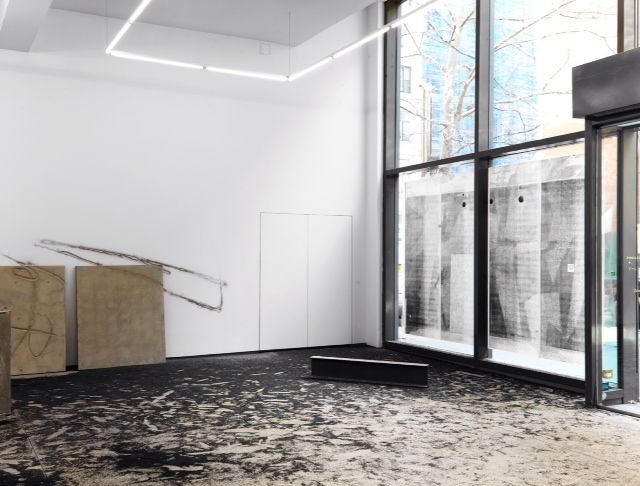 Inside the gallery gray structures are placed sporadically on what appears at first to look like black sand but closer up turns out to be silicon.  The work references urban landscape not by modeling but as hyphenated and monochromatic abbreviations of urban landscape.  It was easy to imagine more outside of the walls and I’m reminded of the time someone told me “A man standing in the middle of a ruin signals either the beginning of civilization or its end”.   Notations somewhere between illegible handwriting and the smooth sailing of lubricated paint are on the wall leaning panels by Faldbakken and Oscar Tuazon.  While paint normally sits on top of a surface, these drawings are made by debossing, material being taken away, and when the gesture runs over, parts of the gallery wall is taken out.

The panels by Faldbakken and Tuazon and the triangular pieces by Einarsson and Tuazon are materially similar but while the panels reference painting, the triangular pieces are freestanding and the marks remind me of manufacturing rather than composition.  This being a group show in which most of the pieces were made by the artists in collaboration, the only solo piece is a cast I-beam by Tuazon.  I wondered about this and his education at the Cooper Union, Peter Cooper being the inventor of the I-beam and this being the last free year of the school.  The I-beam lays in ruin, looking like something we have lost touch with. 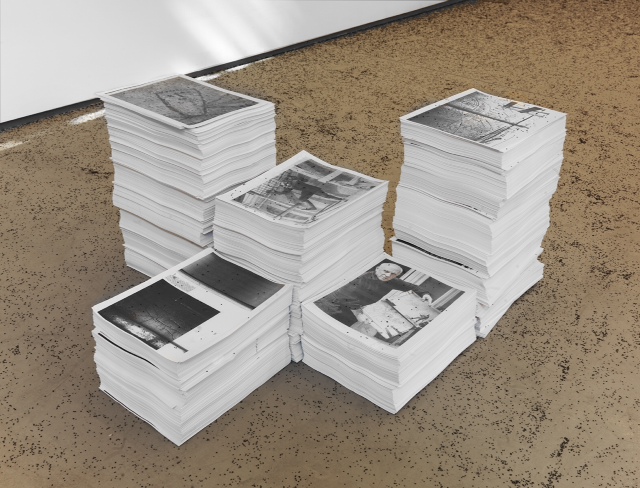 On the other side are more inkjet prints by Einarsson and Faldbakken but on letter size copies and stacked in stacks of five, each with its own separate but repeating image.  The pixels on the pages speak to the way silicon sand is scattered on the floor and confuses scale. The way the images of a figure and a man with a book are next to a drawing of a face, abstractions, and lines invite curiosity about appropriation over narrative. 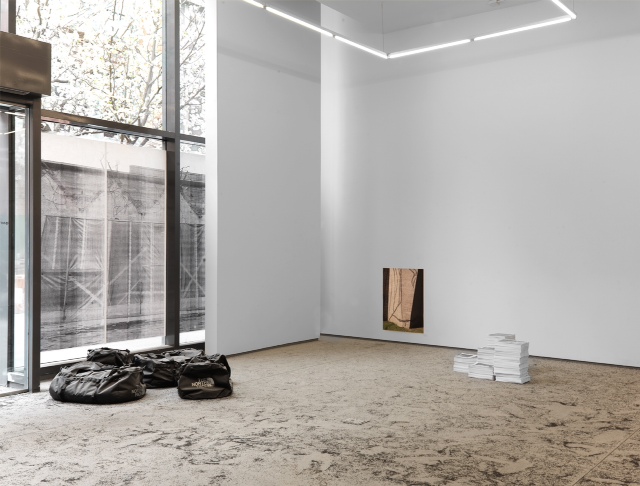 The two pieces done in collaboration with all three artists in the show are four Northface bags and the only work with color in the show – a segment of a structure with a debossed drawing outside and on grass.  At first the photo feels like a window, smaller than the confused windows of the gallery the inkjet prints take over but on a closer look the photo is not flush against the wall.  The bags are half full and fully closed but their real mystery is the way the gray dust on one exposed surface exaggerate the shadows and makes the real items look photographic.

The show knows structuralism and knows the urban but choices are made for structures to be read two dimensionally. The work is about placement rather than place.  When I stepped into the gallery I found myself in a position between my experiential body and the brutal ways urban space maps me.  Then I ducked under my friend’s umbrella and stepped back out into the New York City rain.

Photography provided by the Gallery and the Artist