Manhattan is dead. Who killed Manhattan? We went to ask the noir writer Gary Indiana in his living room on the Lower East Side, and the diagnosis is not at all reassuring.

Do you mean Manhattan? In these parts, art is dead. By now, no artist lives here anymore. Everything is too expensive. The people of this city don’t know how to live. They are content to spend time to buy stuff and to work to pay for it in installments. The young artists today, if they ever come to New York, they go to live in Brooklyn, but I honestly do not understand why. You, too, what the hell are you doing in New York?

Are you thinking of leaving?

No, and where could I go? By now I’m old. I’m dying. If I were twenty years younger, I think it would leave.

And where would you go?

To Rio, or Havana. In a city that’s really growing, while here everything is saturated. If I were in Cuba or Europe, I’d go out every night. Only here I never go out.

What is the problem?

The people and their rejection of normalcy, of an ordinary horizon. This city, America, loves the successful sociopath and thinks it’s normal to dream of becoming like him. New York has become a city of repressed emotions. And this is a real tragedy.

Only New York? This evil does not seem to be shared with other contemporary metropolises?

Maybe. I don’t know about the whole world, but emotionally Europeans are more crafty than Americans. In general, what has today’s culture become? Naked women that sway their hips on TV and in the newspapers. But not all of them, please write it down, because among them there’s also the daughter of some of my friends.

When did this cultural breakdown of your city start and why?

Let’s say ten years ago. All the theaters have disappeared, the places where artists and intellectuals could meet. I remember the Mudd Club, Club 57, the various performing garages in Soho … Yesterday, the Lower East Side was the best place to live. Today everything has disappeared.

Have you always lived in the Lower East?

Tell us about your arrival in New York?

It was 1978. I came from Los Angeles. So, culturally, it was important to be here.

Today, culturally where is it important to be? On the Internet?

Internet is sweeping everything away. I like the fact that printed newspapers are disappearing. I’m also very pleased that the New York Times is in risk of closing.

What do you have against the New York Times?

I find it a retrograde and ridiculous newspaper. Stuff from middle class. Full of opinions and lacking in facts.

The television is horrible. I think it should not exist.

What will happen to books?

People read what I write, and I believe they will continue to do so. Perhaps in different formats.

And what do you think of new media?

The technology leads to pathological addictions very quickly. Especially the screens. Almost worse than the desire to become rich and famous.

At the beginning of your career you also wrote about contemporary art. Would you like to talk about it?

No. Contemporary art did not interest me then nor today. I was writing articles because they paid me, and I stopped as soon as possible when I could start being only the novelist.

Nothing else to say?

Today you are an internationally renowned writer. In Italy, your most read book is Three-Month Fever: The Andrew Cunanan Story.

I had already begun to write a book about Andrew Cunanan before he murdered Gianni Versace. He moved from one town to another, killing people. I don’t know. I found it interesting.

The life and death of Andrew Cunanan well explain what we are. Born in a tiny middle-class family, he used his own body and his own intelligence to climb up to the highest social classes, so something is broken inside. As Gore Vidal once said, to see the face of a killer, just look in any mirror.

Any plans for the future?

Right now I need to think. I don’t have a clear idea of ​​what I will write in the next three months.

Will you write from New York?

And where else, otherwise? In this city, either you’re rich, or it’s a trap. 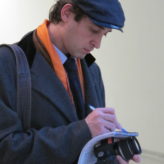 Alessandro Berni is a writer based out of New York city.