Miquel Gelabert was one of three emerging artists selected to inaugurate the New Artists’ Space at the Fundació Arranz-Bravo (2009), and it is through this association that Franklin Bowles Gallery, along with a number of important collectors, have come to acknowledge and appreciate his work.

Franklin Bowles Gallery (New York) has enjoyed a long and successful relationship with the Barcelona based artist, Eduardo Arranz-Bravo, whose career has flourished remarkably over the last 15 years. Along with numerous Museum exhibitions in Spain, the Spanish government awarded Arranz-Bravo with his own Museum/Foundation which opened to the public in 2007. Both Arranz-Bravo and the Director of the Foundation, Albert Mercade (a published scholar of Spanish art) are dedicated to the support of emerging talent in Catalonia, and accordingly have devoted a portion of the Foundation site to the exhibition of important emerging artists.

Miquel Gelabert has participated in numerous group and public exhibitions throughout Spain since 2005, including the Museu de Granollers, Fundació Cuixart and Fundació Valvi (Barcelona)  and the Fundació Àngel Planells, Blanes, Spain. He was one of three emerging artists selected to inaugurate the New Artists’ Space at the Fundació Arranz-Bravo in Barcelona in 2009. 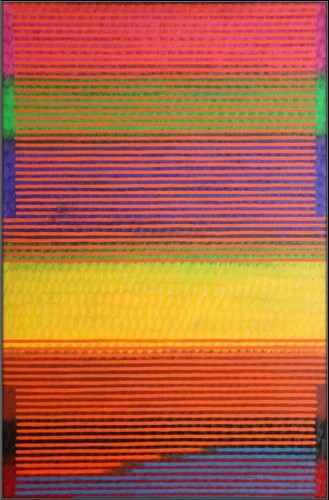 “After many years of reflecting on my paintings, I realize that my inspiration comes from the light, colors, shapes and memories that landscapes have imparted to my soul and feelings. That is why I love to play with the word “Landscape:” Land-escape, Land-space, Land&escape – in the titles of my paintings. The influence of the landscapes I am surrounded by, whether they are seascapes, the countryside or urban landscapes, are always present in my paintings. Sometimes a given painting might be a mix of all three and the color, shape and light from each will be present in the composition. The strong presence of the Mediterranean Sea and its reflected light is an enduring memory from my childhood which continues to affect me and is always present in my painting.

As an artist you must always be open to looking at and learning from the work of other artists. It’s critical for your personal evolution, and over time I have become interested and, in some cases, influenced by many other artists. The list is enormous especially since as you grow as a person and an artist, your tastes change and expand as well. Initially I was influenced by the American abstract expressionists, especially Mark Rothko and Barnet Newman, but I was also interested in Robert Motherwell, Piet Mondrian, and Kazimir Malevitch. Ad Reinhardt and Sean Scully were also interesting to me in the earlier years. And, I was always attracted to the work of Miró. But as I, and my work, matured I came to love the old masters, and at the same time, I now love the European avant-garde. I’m always looking for contemporary artists that could be of interest. Truly, the list could be infinite.

I must give credit for this open-mindedness to my friendship with Eduardo Arranz-Bravo. We have worked together for many years, since I was studying Fine Arts at the university in Barcelona. Although our painting styles are very different, Eduardo has been an important mentor in developing my talents as an artist. I greatly appreciate his help and influence both personally and professionally.”